Dave was proudly a “one club man”, having played all his career for Steeton – from juniors through to seniors. His senior playing career spanned 36 years – from 1964 until his retirement in 2000.

Dave was a nimble-footed opening batsman, whose quick reactions meant he felt most comfortable pulling on the back-foot. He scored 9,733 runs including 6 centuries and won the Club’s batting prize 6 times, as well as the 2nd XI league batting award in 1987. All very impressive in the days of uncovered pitches.

Dave was also a canny bowler, who bowled nippy medium-paced darts before turning to spin. He collected 263 wickets and won the Club’s bowling award 3 times. Adding to his cricketing all-rounder status Dave was a specialist gully fielder, who took 112 catches for the Club.

Dave was a great character and has been a familiar face at the club for decades. He always had the clubs future at the forefront of his thoughts. His contribution over this time is immeasurable, and he will be sadly missed by us all. 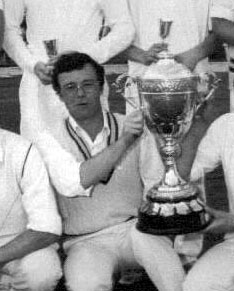